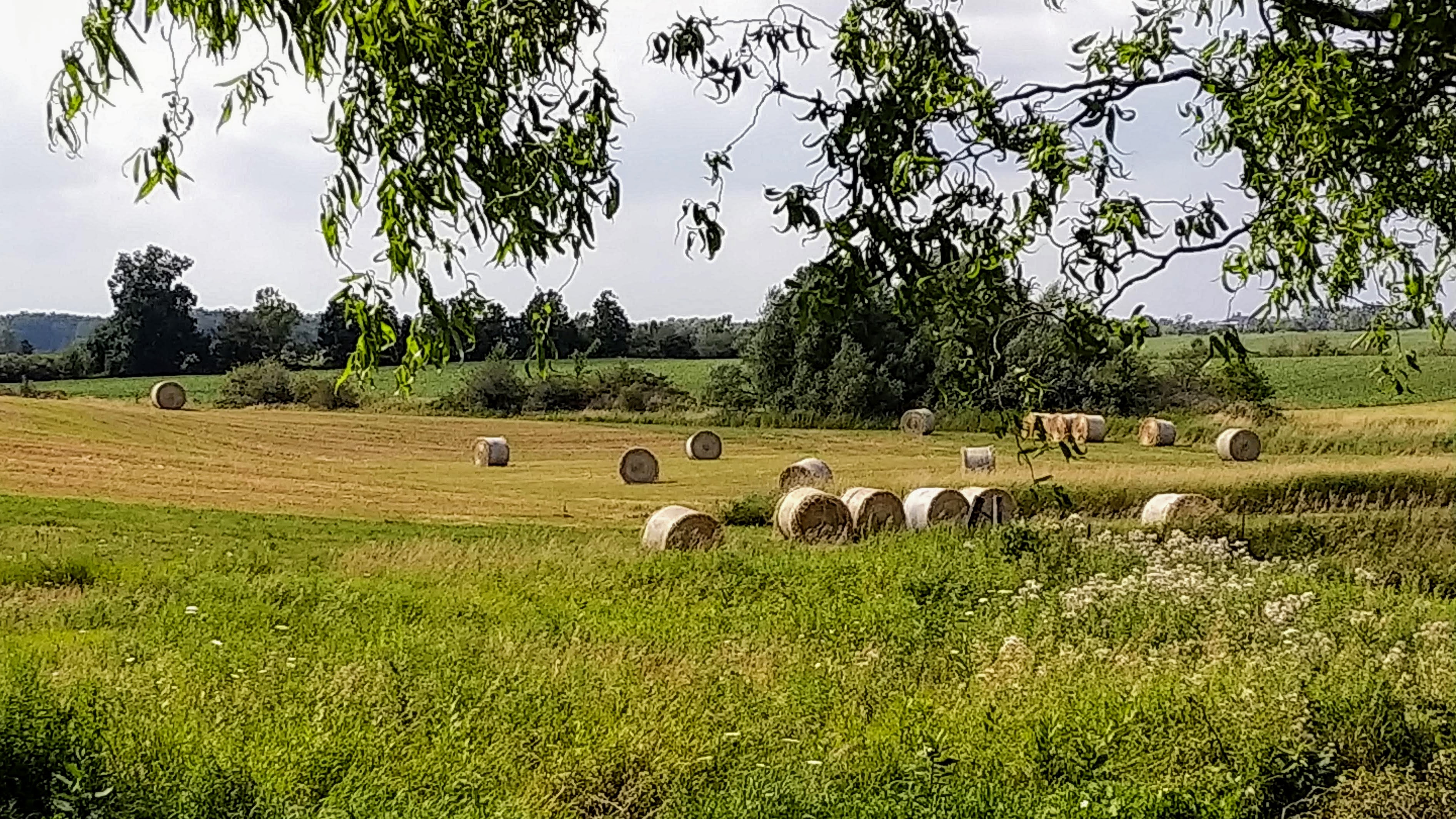 Part 1 of a blog series about
COP15 on Biodiversity

In December, MLSM Canada’s Agnes Richard and Karen Van Loon were in Montréal during the UN Biodiversity Conference COP15. They reflect on their experiences at COP15 and parallel events in a 5-part blog series.

Behind my rural home there is a patch of greenspace that is not cut for hay. For over 25 years I’ve worked to introduce native plant species to increase the biodiversity of this space, and create desperately needed habitat where Monarch butterflies can thrive. Last year I was lucky enough to find one of these beauties emerging from its chrysalis. I’ve witnessed many of these miracles and they never cease to give me joy.

And the plant they love to munch, milkweed; who knew there are so many amazing uncultivated varieties? These photos show a few growing wild along a rail-trail nearby, and I’m awed by the array, so it saddens me to realize they’ve been disappearing from rural landscapes because of contemporary farming and land use practices.

What’s worse is that on July 21, 2022 the International Union for the Conservation of Nature (IUCN) added the Monarch Butterfly to the Endangered Species list! How could that be when so many people like me have been working to revive naturally occurring milkweed, crucial to the life cycle of Monarch butterflies, by adding it to our urban and rural gardens? What does this say about Canada’s efforts to protect species we know and love, not to mention the ones we only know through documentaries, magazine photo spreads, or news items concerning this or that animal holding up development of a desired area?

This is just one story among thousands about plants, animals, insects, and micro-organisms that are threatened globally by human activity. 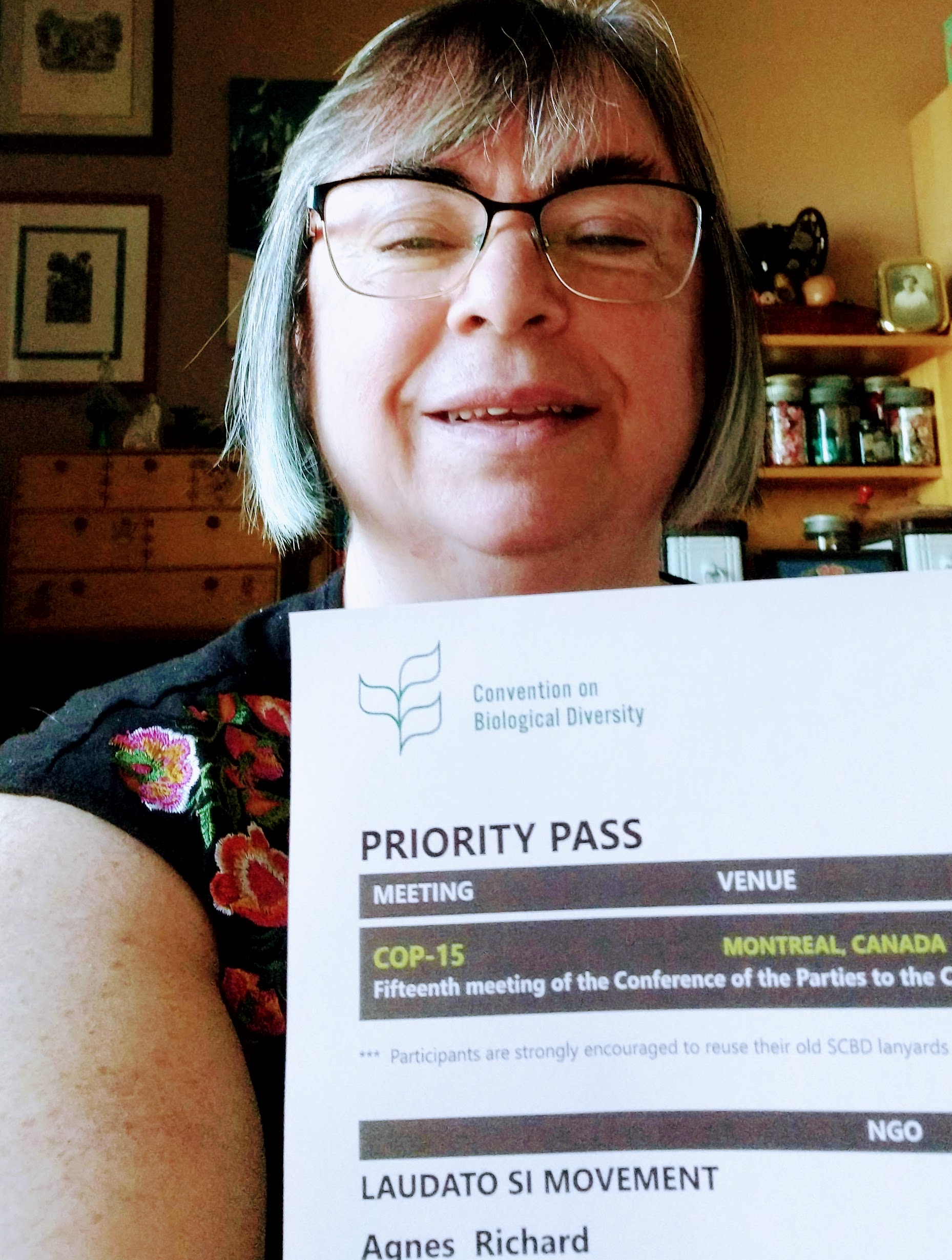 This past summer it was announced that the second portion of an already delayed UN Biodiversity Conference (COP15) was to take place in Canada, due to ongoing complications with COVID experienced by the host country, China. I was thrilled to learn the Laudato Si’ Movement had secured observer status for me to attend. But I was also perplexed. What possible impact could I have to reverse the tide of dire news about biodiversity loss?

First, I had to learn what the conference was all about.

The meeting held in Montréal in December was the 15th international gathering since they began in 1992. The Secretariat of the UN Conference on Biological Diversity (CBD) explains the conference: “The UN Biodiversity Conference convenes governments from around the world to agree to a new set of goals for nature over the next decade through the Convention on Biological Diversity post-2020 framework process. The framework sets out an ambitious plan to implement broad-based action to bring about a transformation in society’s relationship with biodiversity and to ensure that, by 2050, the shared vision of living in harmony with nature is fulfilled.” The UN declared the decade 2011 to 2020 as the United Nations Decade on Biodiversity. In a 2010 Strategic Plan for Biodiversity, a set of 21 Aichi Biodiversity Targets, were developed to help countries measure their efforts towards protecting existing biodiversity and restore damaged yet vitally important biodiverse regions. Not one target had been met by 2020! For most who attended COP15, this knowledge signaled the extreme importance of the conference. We need workable targets that all participating countries could get behind and actually implement.

The urgency of the task was also abundantly clear. Quoting the 2019 IPBES Global Assessment report  the President of COP15 noted “human activities threaten more species now than ever before … around 25 per cent of species in plant and animal groups are vulnerable. This suggests that around one million species already face extinction, many within decades, unless action is taken to reduce the intensity of drivers of biodiversity loss. Without such measures there will be a further acceleration in the global rate of species extinction, which is already at least tens to hundreds of times higher, than it has averaged over the past 10 million years”.

This is serious stuff!  I recalled how right Pope Francis was in Laudato Si’ when he emphasized the incredible, joyful and tragic interconnectedness between we humans and all life on this planet.

It cannot be emphasized enough how everything is interconnected. . . Just as the different aspects of the planet – physical, chemical and biological – are interrelated, so too living species are part of a network which we will never fully explore and understand. LS 138

And this realization helped me understand what my role at COP15 might be. I planned to join with others from civil society, the caucuses of Indigenous People and Local Communities, Women, Youth and especially other faith traditions whose purpose at COP15 was to remind the delegates of this interconnectedness between human needs, our activities, our future aspirations and the creatures and biological systems of our planet home.

As it turns out, there is a group of people who have been mobilizing global faith responses to the biodiversity crisis over the past two years, and together they successfully pressed for a special Multi-Faith caucus at COP15, the first for a UN Biodiversity conference. Following the first half of COP15, held virtually by China in 2020, this group prepared the Multi-Faith Response to the Post-2020 Global Biodiversity Framework. A quick look at their six recommendations confirmed for me that these folks were speaking the language and truths that I too wanted to raise up. Even before arriving in Montréal the leaders of this hard-working group made me, members of the Laudato Si’ Movement and fellow Canadian faith leaders working in the sphere of social and environmental justice, feel welcome in their midst. They offered the Multi-Faith pavilion as a home base for our planning meetings, networking and media events and communications needs.

My path and purpose were becoming clearer. Watch for Part 2 of this blog series next week.