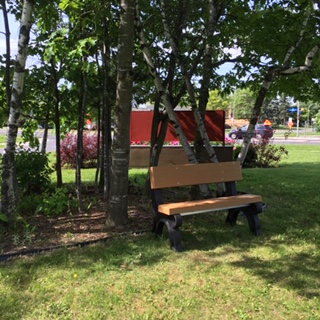 The Orleans United Healing Biodiversity Garden was created to commemorate the 40th anniversary of the church. The focus on both biodiversity and healing came from the desire for this new garden to provide both habitat and shelter for wildlife and offer a relaxing space for meditation and prayer for community members including those benefiting from a new healing ministry program. Nature itself offers healing benefits and this garden provides a designated space to sit outdoors and enjoy the wonder and beauty of being outdoors.

Orleans United Church is a vibrant and welcoming suburban church, connecting with the east-end Ottawa community for four decades. It is situated on a large parcel of land along a main arterial in Orleans close to greenspace that includes Bilbery Creek. A dedicated group of gardeners volunteer to tend to the lawn, trees and beautifully landscaped garden beds on the property.

In 2018, some synergies between various church’s ministries and projects helped inspire the idea for a new garden space. With the church actively pursuing a Greening Sacred Spaces certification, this allowed members to start looking at their property in a new way. At the same time, a new healing ministry called Healing Pathways, provided another seed of inspiration: to offer a safe and restful space for those who were on this path of healing. Along with the upcoming 40th anniversary, the building was also undergoing some changes to the exterior (as there was a need to remove an aging tower feature) – which allowed all of these initiatives to coalesce into the idea of creating the new Healing Biodiversity garden. The vision was for a space where “OUC could encourage members of the community to enjoy (the) healing garden for all its splendor or relax on the bench and meditate... developed with paths and patterns which (would) invite people to wander through it and admire God’s creation.”

Once the project was conceived, the healing garden team leader identified the key steps to create the garden, put together an estimated budget and approached the church executive council for approval and funding support. With the vision, objectives and cost outlined in a written brief and the confirmation of matching funds from a local organization, the project was approved.

The healing garden project would be built in phases over two to three years, working around the required demolition of the church tower. Further expansion of the garden could be considered as the project developed, if there was a desire to reduce more of the lawn and increase biodiversity on the property. The intention was that this garden would be low maintenance, once established, with meadow flowers, stepping stones and shrubs, allowing the plants to ebb and flow through the seasons and years. The first phase in 2018 would be the breaking of ground, defining the garden area with stepping stones and an initial planting of flowers and shrubs before winter. Other biodiversity elements (bird feeders, insect hotel, birdbath, water feature) would be added in phase two and three.

Biodiversity also helps heal creation. It’s becoming an important thing to consider in cities where more variety and resilience in flora and fauna species helps protect the ecosystem ensuring its health and ability to regenerate. Birds, insects and other wildlife are all part of a food chain that keeps this ecological cycle going and providing food, water and shelter in our gardens aids in protecting many species including some that are endangered such as monarchs, some of our native bees and a few favourite birds that are becoming more rare. A biodiversity garden provides habitat in areas that may not offer much more than ornamental grass and paved urban spaces.

Some key steps for the first year, to prepare for the garden work, included 1) an inventory of the current landscape for native plants that could be divided and shared to the new garden bed, 2) further research on native plants including a consult from a local horticultural teacher at Algonquin college and 3) creating an initial design for the garden. The inventory was successful – identifying some well-established native plants that were available for future splitting and transplanting. The team also surveyed the property for the best spot for the new garden and were inspired after seeing an outdoor yoga class being held on the front lawn near a large maple tree. With these steps undertaken, the initial design of the space started to evolve, taking into consideration the shrubs and plants available.

Over the summer, detailed communication helped keep the garden team aware of the progress and notified volunteers when extra hands were needed. A small grove of native trees was also “adopted” as part of the healing garden to add some diversity and habitat variety to the project. The breaking of the ground for the initial garden space was delayed due to hot summer days and a more pressing priority: the removal of some damaged trees. But in the end, this delay allowed the team to take advantage of the cooler September weekends and the coinciding of the initial garden work day with the Season of Creation to help motivate them! The new plants would also have a much easier time establishing themselves with cooler temperatures and wetter autumn days.

On the "groundbreaking" work day, twelve volunteers, some bringing their own shovels, helped out. There were many hands to help with all the tasks including: marking the bed, roto-tilling the earth, levelling the ground, moving the earth and mulch, laying the stepping stones and planting the flowers and shrubs. The initial native plants that were added to the garden included Yarrow, Asters, Coneflowers, Golden Alexander, Showy Tick Trefoil and Monarda along with Cinquefoil and False Indigo shrubs. And the important key feature: a bench which provided a great vista to take it all in, was installed close to the garden bed in a shady area. 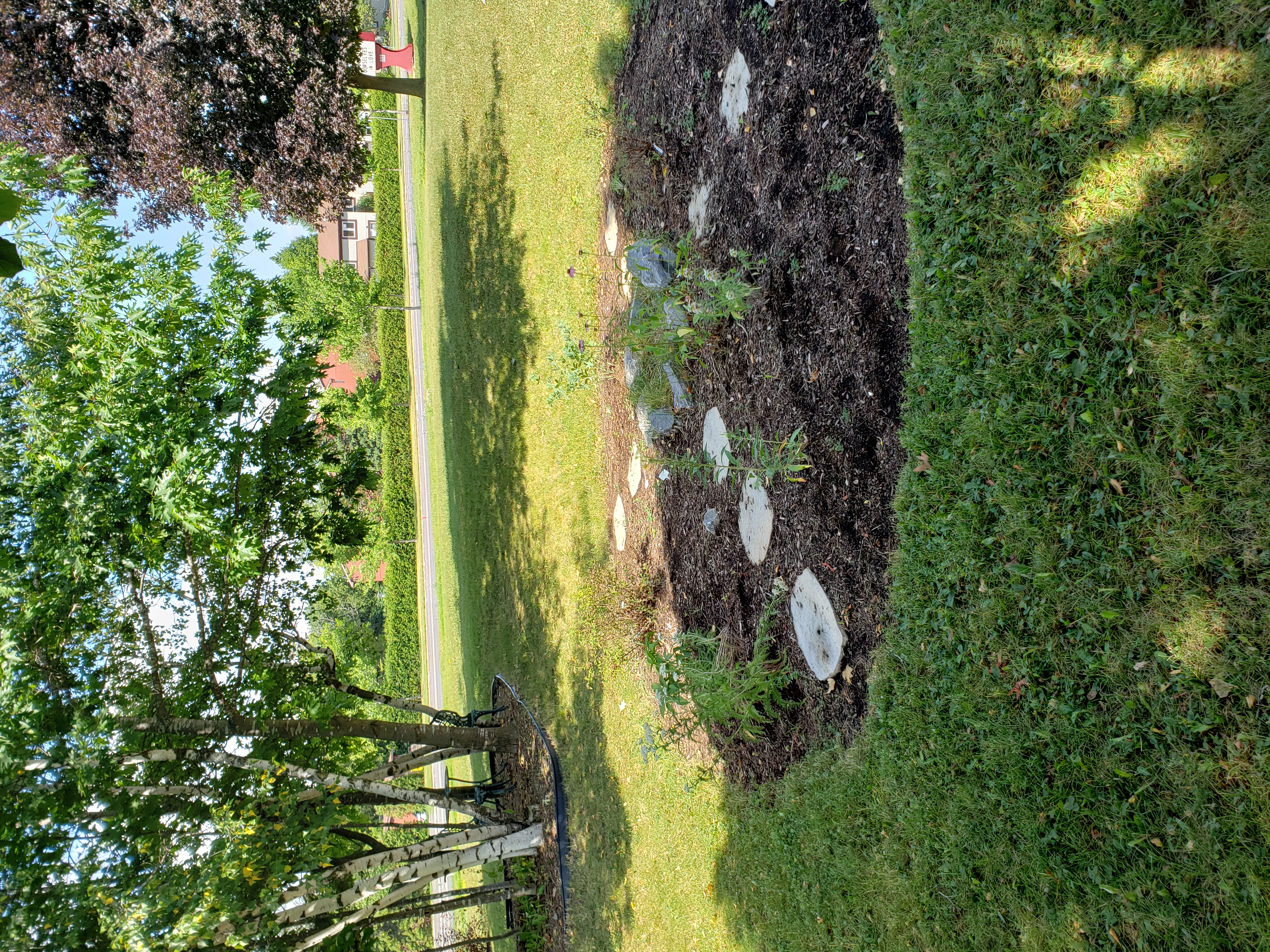 On the 30th of September 2018, a special blessing event for the garden was held, which included words of dedication, and a short ceremony where healing prayers and rose petals from a recent healing path session were buried in the garden. This was also the day for the annual pet blessing, which could now be held near the new garden - more than a dozen pets (cats, dogs and a hamster) of the congregation and community receiving a special blessing that day. Also in September, the Church Council recognized the Healing Biodiversity Garden as an important commemoration of OUC's 40th anniversary and the Worship Ministry confirmed that they were identifying ways to use it for their spiritual program.

In 2019, the next phase of the garden project was on hold until after the tower demolition. Once the tower was removed, property drainage was fixed, general landscaping was amended before any other work in the front of the church was continued. This took most of the gardening season, so the main components of Phase Two were rescheduled for the next year. However in the fall, some more native plants were added to the healing garden bed to continue filling in the space.

Plans for Phase Two in 2020 will include more plants (some plants didn’t survive the first winter), some further seating features and some habitat enhancements such as a log or two that can break down over time along with a possible water feature such as a bird bath or bee water dish.

Be Organized for your Work Day.

Ensure that there is good communication with the volunteer team, know who is attending, let them know what they can bring and what will be provided. Double check that all your materials will be available for the day including deliveries (soil, mulch, rocks, etc) and equipment (shovels, wheel barrows, rental equipment). Have a list of all of the tasks so that you can direct people easily. Having a large group of people work for a shorter amount of time is better than a small group that had to work over a few days – this really boosts morale!

Identify a Variety of Tasks and Work Zones.

This allows people to be able to choose what they want to do, where they think they will be most effective and also ensures that they won’t be on top of each other – such as removing all the unwanted plants, filling up wheelbarrows or even working in the kitchen. (Offering food to the work team is a great way to show your appreciation and allows the volunteers some time for fellowship!) Taking photos is another great task as it documents the day and is an easy way to confirm who was there.

This was an easy design to shape into the existing lawn and is pleasant to the eye from the vantage point of the street. It also is a simple shape to mow around. The flowers can be balanced around the circle and shrubs added as a backdrop or in the centre. For Orleans United this design also allowed them to help disguise a “man hole” and fill a low spot in their yard by creating a raised bed. Seek out help in terms of the specific layout for the plants so that you know where to dig on planting day. 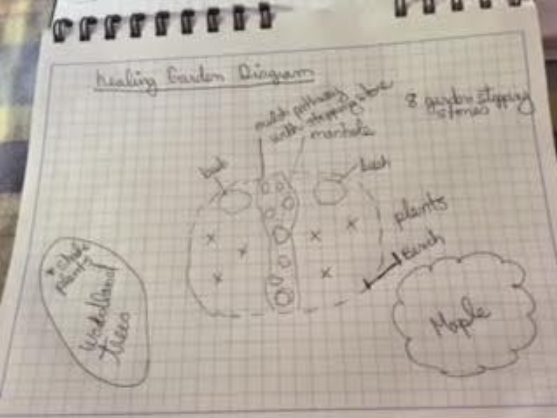 Renting a rototiller allowed for some interest and ease during the day. Everyone wanted to have a go trying it out! It made easy work of starting the garden bed and let people have some fun during a day that demanded lots of labour.

It was wonderful to showcase the efforts of the garden volunteers and the finished garden on the church video screen so that the congregation could see what had been done. The photos were shown on a loop before the service. When the bench was delivered, this really completed the work and the congregation could see the vision for the Biodiversity Healing Garden finally taking shape. The shared photos demonstrated that this was a place for special gatherings, where people could come to meditate, contemplate or just relax – welcoming people to come into the space.