In the 1970s, environmentalism came to life in Sudbury and Inco Nickel developed a conscience. The super-stack was built to mitigate local air pollution, barren land was limed to reduce acidity, and thousands of trees were planted over decades.

Amazingly, the land regenerated, small animals, coyotes, and bears came back, and local people understood that it didn’t have to be the way it had been for most of the 20th century. Today, as we move through the 21st century, there is a growing understanding of how even completely devastated landscapes can be revitalized, as well as an appreciation of the interconnectedness of all life. Across Canada, similar wrongs to Inco Nickel’s have been and are still being made, “but as Christians, we are called to be part of organized activism and public policy to correct environmental mistakes,” Lorene says.

But Lorene is realistic too. She points out that there are so many issues that need to be addressed, and how, as individuals, we can’t address them all: “We have to think about which ones we will provide monetary support to, which ones will we promote with advocacy work like letter writing and online petitions, which ones will we dedicate our volunteer time to?”

It can feel overwhelming but Lorene has found her niche. As a member and Social Justice regional representative for the Society of St. Vincent de Paul (SSVP) in her home parish of St. Raphael’s, Burlington, she is comfortable with the connection between Social Justice work and Care of Creation. This is why Lorene and a fellow parishioner are co-leaders of the Ministry of Social Justice and Care of Creation at St. Raphael’s. The Ministry promotes the work of Development & Peace and “green” initiatives related to Laudato Si’. It also seeks to work cooperatively with other parish ministries, such as the CWL, on Justice related activities.

A focus of the SSVP is to be mindful of how they deliver their services, as not just hand out charity, but rather as a means of helping people find their way out of poverty and the destitution that comes with it. To be mindful of that is to be aware of the causes of poverty in the first place, and of course increasingly, climate change is a contributing factor.

Of particular concern to Lorene are the people living in Canada’s far north. Climate change has been exacting considerable adaptations on Inuit populations for decades, and their lifestyles will continue to experience far more drastic changes for decades to come.

An initiative Lorene is particularly proud of began with the St. Vincent de Paul’s “North of 60” program. At St. Raphael’s a shipping container of food and goods is prepared annually for the community of Whale Cove, Nunavut, a small town on the western shore of Hudson’s Bay, just south of Rankin Inlet. 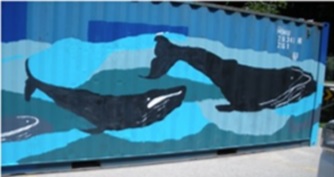 In its third year now, North of 60 began when the dire situation of the isolated community came to the attention of the national and Ontario Regional SSVP, at which time St. Raphael’s Conference President took up the challenge of helping a northern neighbour. Of primary importance was the desire to be respectful to the specific needs and wishes of Whale Cove. The decision to get involved had great implications in the parish and beyond. St. Raphael parishioners, other SSVP conferences in the area and three local Catholic schools gave generously. One school donated materials and student participation to paint an Arctic mural on the shipping container. “People like to give when they can get behind a project close to their heart and understanding,” Lorene says.

With everyone working together, the initiative has inspired donors and helped to improve the daily life of Whale Cove residents. As part of her work with SSVP Lorene, is working with another member to explore the development of a cross-cultural exchange involving youth in Whale Cove and a Burlington school, perhaps through a “pen pal” project.

“The more you learn about how other people do things, in a direct and personal way, culture to culture, the better chance you have of forming adults with a more interconnected world view,” Lorene says. “By realizing our interconnectedness, it becomes easier to share in, and assist with, the struggles of our brothers and sisters around the world.”

For Lorene, justice advocacy is part of who we are as Catholic Christians. She believes that if we are to live out the messages of the Gospel and the Encyclical Laudato Si’, care for all of creation is our mandate. With St. Teresa of Avila, Lorene says that we are the hands and feet and voice of Christ in our times. “But our messages must also be inclusive and be able address to the different levels of awareness in those we speak to. We must strive not to be confrontational, but to educate,” Lorene says.

As far as challenges go, Lorene acknowledges that yes, there will always be hurdles. Not all initiatives are going to have a responsive audience, but you should not give up on them, she says. She advises that it is important to nourish one’s own self: “Seek out events and prayer opportunities that sustain you through the darker days of your work, those times when you think your efforts won’t change anything.”

For Lorene, the writings and meditations of Richard Rohr, Franciscan theologian and Richard Wagamese, Ojibway spiritual writer, nourish her faith. “Find people with a common cause in faith and justice,” she concludes. I couldn’t agree more. We have a lot of uphill journeying to do Let’s travel with those willing to share the load.