People who live in the St James Town apartment towers in Toronto’s inner city don’t have air conditioning. But if the power goes out, they’ll suffer more than most. Many residents are seniors or use mobility aids to get around. As the most diverse neighbourhood in North America, language can be a barrier, social connections may be weak, and most residents don’t have incomes that allow them to store extra supplies of food, water and cash.

Thanks to sponsorship from the Insurance Bureau of Canada (IBC), neighbourhood community groups were able to deliver two July 2017 workshops that started a conversation around building local resiliency and preparing for emergencies. Josephine Grey is the director of Low Income Families Together (LIFT). She’s lived in St James Town for 30 years and knows the challenges first hand. Climate change brings increasingly frequent and extreme weather events such as floods, severe heat, and unanticipated winter conditions. Remember Toronto’s 2013 ice storm? In a community with a population of more than 17,000, Josephine knows that the time to plan is now.

LIFT partnered with the youth-led Conscious Minds Co-operative (CMC), a non-profit that cultivates resilient communities, and the St James Town Co-operative. They asked Community Resilience to Extreme Weather (CREW) to support them in developing a community resilience and emergency preparedness plan. 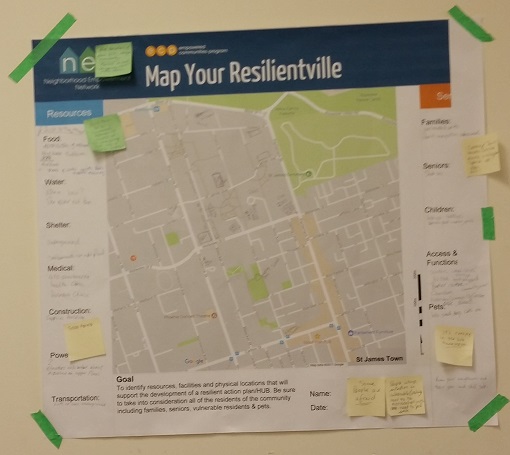 The workshops, the first in a series of events, were an opportunity for a rich exploration of issues and concerns raised by residents. After much discussion, a consensus for action finally landed on water and food. Excitement grew as a scheme to dehydrate food took shape: made by local cooks and marketed not only to neighbours but also across the city.

This could be a first: using food to promote emergency preparedness. Imagine buying delicious and attractively packaged food for your emergency kit at your local farmer’s market. Most Canadians ignore government messaging which warns that they must be prepared to look after themselves and their neighbours for at least the first 72 hours of emergency. But no one’s ever made it into a tasty proposition. CREW will support St James Town residents as they establish their emergency plan around food security — and dehydrated food is just the beginning

This winter, CREW will manage a pilot project led by Faith & the Common Good to establish resilience hubs in Brampton, Hamilton, and Toronto. We can’t wait to see what issues those pilot communities will choose to motivate and drive their own resilience preparedness plans!