The web of life needs our protection more than ever

We are part of a wonderfully complex and interdependent web of life. Our well-being depends on healthy biodiversity and ecosystems and the life giving services they provide for us such as clean water, food, oxygen and climate regulation. From a Christian perspective, every species and being in this web of life are precious because God created them and all reflect something of God. In Laudato Si’ Pope Francis reminds us that we are part of a “universal family” which we are called to cherish with love and respect. Imagine how life would flourish if we did!

Instead, we have not sufficiently cared for the web of life which sustains us and it is declining as never before in human history. Accelerating climate change is one of the main reasons. The record breaking heat in June and maybe July as well as unprecedented fires raging in the Arctic are just two of the latest signs.

Around 1 million animal and plant species are now threatened with extinction according to the summary of the first ever United Nations Global Assessment Report on Biodiversity and Ecosystem Services released last May.

As report co-chair, Prof. Settele, explains, “Ecosystems, species, wild populations, local varieties and breeds of domesticated plants and animals are shrinking, deteriorating or vanishing. The essential, interconnected web of life on Earth is getting smaller and increasingly frayed. This loss is a direct result of human activity and constitutes a direct threat to human well-being in all regions of the world.”

All are not equally affected however-- Indigenous Peoples and many of the world’s poorest that depend more on nature are projected to be harder hit. The report outlines that climate change is already negatively impacting nature with more expected.

It is not too late to change course. To restore and protect nature, the report emphasizes that transformative system-wide change is needed starting now and at all levels from local to global. Decreasing consumption and waste is one of the key changes needed.  This echoes the “rapid and far-reaching” transitions needed to significantly reduce the risks of climate change outlined in the UN Global Warming of 1.5°C Report.

A climate emergency call to action

At a June 14th Vatican meeting with CEOs and investors of oil and gas companies, Pope Francis declared “Today’s ecological crisis, especially climate change, threatens the very future of the human family... Faced with a climate emergency, we must take action accordingly”. He called for “a radical energy transition”. Pope Francis emphasized that future generations should not pay “the price of our irresponsibility” and that “young people are calling for change”. 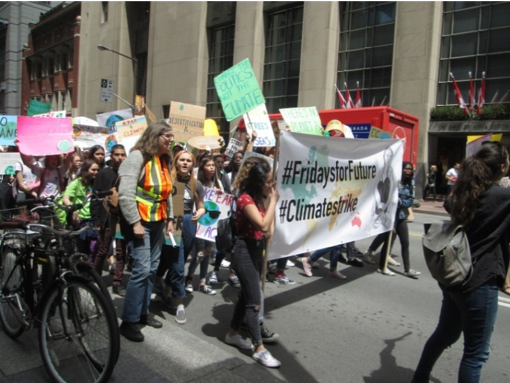 Global climate strike on May 24th in Toronto

This year Catholics began joining the movement with over 100 Catholic climate strikes around the world on May 24th, the four-year anniversary of Laudato Si’. The next global climate strike will take place on September 20th during the Season of Creation, and before world leaders gather for the UN Climate Action Summit. Laudato Si’ Generation, the youth branch of the Global Catholic Climate Movement, is leading Catholic participation in the climate strikes and is providing resources and event registration.

Saturday Sept. 1st  World Day of Prayer for the Care of Creation