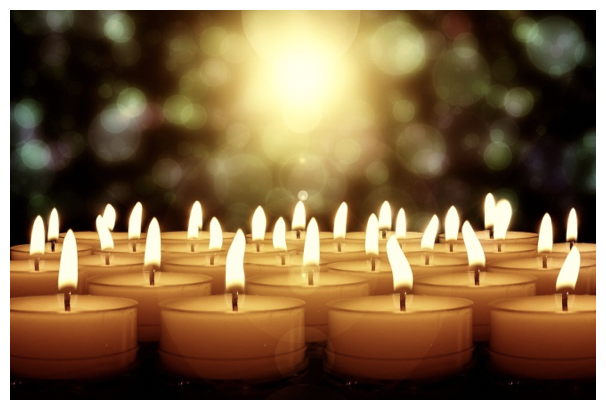 On December 9th the UN Environment Program reported that despite “a dip in greenhouse gas emissions from the COVID-19 economic slowdown, the world is still heading for a catastrophic temperature rise above 3°C this century” which is far beyond the Paris Agreement goals and would leave large parts of the planet uninhabitable. The report emphasizes that a green pandemic recovery is essential to closing the climate action gap—yet such action so far has been limited as most G20 countries’ pandemic recovery spending “has been predominantly high carbon”.

This report is just the latest among many all pointing to the need for urgent action. People of faith are living hope and working together to “change the wind” towards just and compassionate responses to the pandemic and climate emergency. All are invited to participate in these efforts. As Pope Francis quotes the bishops of Southern Africa “Everyone’s talents and involvement are needed…”

Thousands of Christians from around the world prayed, participated in events, and took action to care for our common home during the ecumenical Season of Creation running from September 1st to October 4th.

In October, Pope Francis addressed the pandemic, climate change, growing inequalities, and other difficult global challenges in a video message at the online Global Launch of Countdown, TED’s climate initiative. He invited all people of faith and all people of goodwill to embark on a journey of transformation and urgent action with a goal “to build, within the next decade, a world where we can meet the needs of the present generations, including everyone, without compromising… future generations”.

Drawing from the vision of Laudato Si’, Pope Francis proposed a journey together based on ‘integral ecology’  which understands everything is connected and seeks to respond both to the cry of the earth and the cry of the poor. To begin, he outlined three courses of action:

In November, 47 faith institutions announced their divestment from fossil fuels, 42 of which were Catholic institutions including the Commission of the Bishops’ Conferences of the European Union and Caritas Asia. Nearly 400 faith institutions have divested from fossil fuels so far. The Vatican’s recent operational guidelines for implementing Laudato Si’ encourage investment decisions that take “care not to support companies that harm human or social ecology (for example, through abortion or the arms trade), or environmental ecology (for example, through the use of fossil fuels)”. 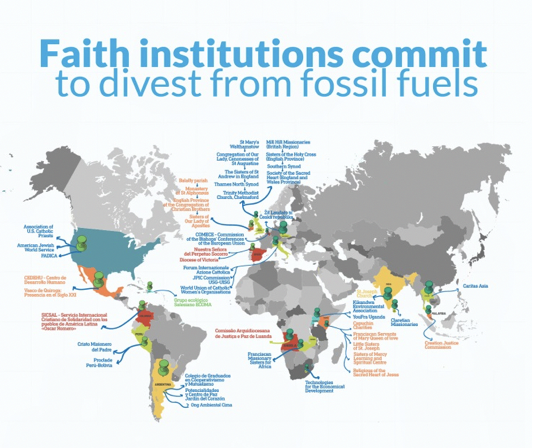 In Canada, For the Love of Creation, a faith-based initiative for climate justice gathered most of the 2,500 signatures on their e-petition during the Season of Creation. Presented to the House of Commons later in November by MP Nathaniel Erskine-Smith, the petition called on the Government of Canada to:

To help increase momentum on the petition, For the Love of Creation now has its own website which includes an advocacy section with instructions and a sample script for contacting your MP.

For the Love of Creation is also encouraging dialogue on climate change and has developed Faithful Climate Conversations, a set of three guides to help with facilitating small group conversations on climate change among friends, family, colleagues, and faith community members. The guides are introduced in the first webinar on Communicating Climate Change, part of an online Fall Forum held every Monday in November. The forum also explored grief and healing, creation theologies, climate justice advocacy, and other topics. Most webinar videos are available for viewing online. 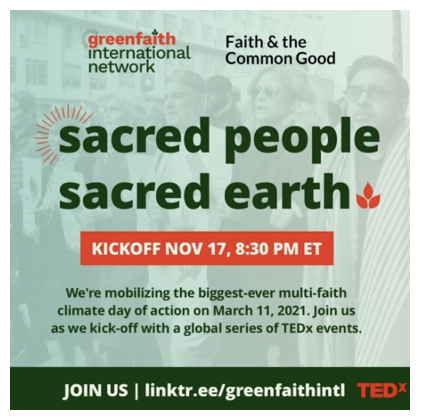 Faith & the Common Good is one of the founding grassroots partners in 14 countries which came together as the GreenFaith International Network to begin a new era of global, multi-faith climate action. The Network seeks to lead by example and organize grassroots people of diverse religions to build moral pressure towards compassionate and just responses to the climate and environmental crises as summarized in a bold set of ten demands.

The ten demands include 100% renewable energy for all—especially for the 800 million people without access to electricity; respect for Indigenous rights; welcome for migrants; net-zero greenhouse gas emissions in wealthy countries by 2030 and accelerated finance/technology transfers for global net-zero before 2050; as well as no new fossil fuel infrastructure, industrial agriculture, or deforestation.

The Sacred People, Sacred Earth statement can be signed by both faith leaders and regular people of faith who seek to “create a new culture, politics, and economy of life that heals people and planet”. The multi-faith statement outlines actions for finance, governments, religious and spiritual institutions aiming to be “models of environmental leadership”, as well as individuals called “to make one’s life a blessing for the Earth and all people”.

On March 11th, religious and spiritual communities around the world will sound the alarm for climate justice by ringing bells, sounding gongs, blowing the shofar, or other sacred sounds.

All people of faith are invited to participate on March 11th, sign the statement, and help spread the word—a short Sacred People, Sacred Earth video is available for sharing. To learn more, watch the November 17th video of the U.S./Canada TEDx event.