The conversation around climate in Canada has shifted, but we’ve yet to see if the response will match the urgency that the science lays out. Which has left Fossil Free Faith asking, What is the role of Fossil Fuel Divestment in this post-election Canada? And, what else can we be doing?
Divestment is still a powerful way for faith communities to communicate that they understand the urgency, and that they are willing to take a little risk to put their money where their faith is – in moving toward a cleaner, more stable, more just world. Conveniently, fossil fuel divestment is also an economically sound decision. So if the moral argument doesn’t compel you, maybe the financial one does.

Fossil Free Faith continues to encourage conversations about fossil fuel divestment, and to support folks who are moving those conversations forward within their diverse faith communities. And we are spending 2016 consulting with those in our network, partner organizations, and allies, to imagine how else we can be useful in moving forward bold, systemic and spiritually-grounded action for climate justice.

If you have thoughts on what role(s) Fossil Free Faith should consider next, I would be happy to hear them: [email protected]. It is a joy to be doing this work with you. 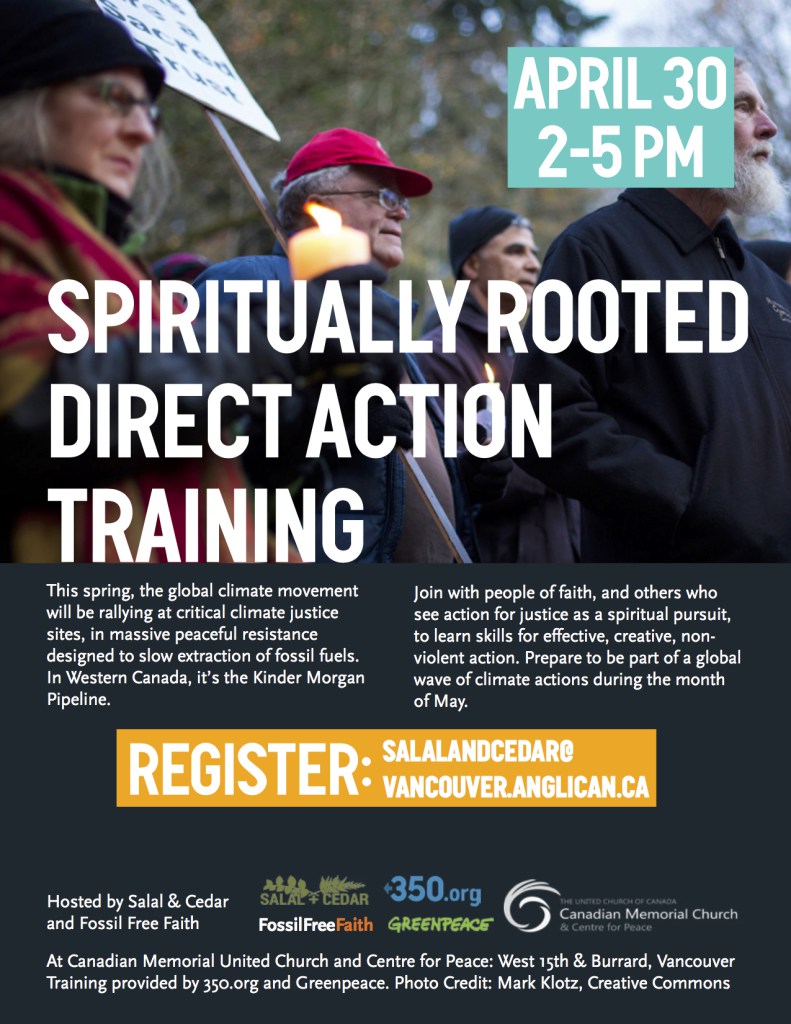 This May the global climate movement will be rallying at critical climate justice sites, in massive peaceful resistance designed to slow the extraction of fossil fuels. In Western Canada this site is Burnaby Mountain and the Kinder Morgan pipeline.
In preparation, Fossil Free Faith is hosting a non-violent direct-action training specifically for people of faith. The goal is for folks to get a sense of what participating in civil disobedience might look like, the many roles for supporting peaceful acts of resistance (many of which are support roles that don’t involve risking arrest), and hold space to ask questions and do some moral/theological discernment around the risks that the climate crisis presents.
Please join us. April 30th, 2–5pmat Canadian Memorial United Church in Vancouver.

RSVP to Laurel Dystra at: [email protected]. And please help spread the word to anyone in your communities you think might be interested.