Season of Creation and Other Upcoming Events in Toronto

Check out these upcoming Season of Creation Activities in the Archdiocese of Toronto—find the following events listed on their website here. 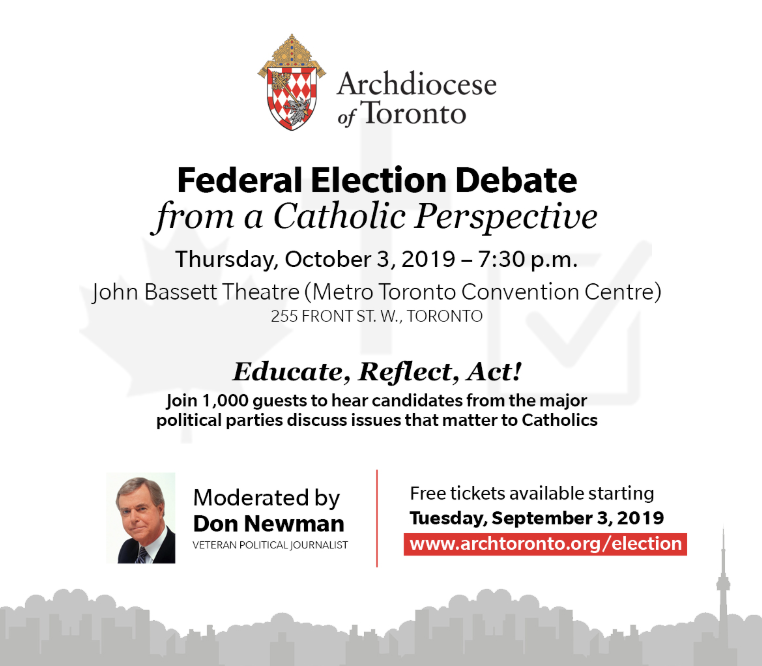 The Archdiocese of Toronto will also host a federal election debate on October 3, 7:30 - 9:15 p.m., at the Metro Toronto Convention Centre:  TV journalist Don Newman will moderate the debate where candidates from the major political parties discuss issues of concern to Catholics, including the environment. For more information and registration to attend this free event, go here.

The Archdiocese of Toronto wants every eligible Catholic to vote in the federal election on October 21, 2019.

One of the five core directions of the Archdiocese of Toronto's Pastoral Plan (Evangelization of Society) calls on us to be engaged in the public square. Gaudium et Spes, which is a product of the Second Vatican Council, tells us that citizens "should be mindful of the right and also the duty to use their free vote to further the common good."

As a charity, the Archdiocese of Toronto must remain non-partisan and cannot direct the Catholic community to vote for a particular candidate or party. What we can do is educate voters and to ensure they are informed to make a responsible decision on election day. We can also share information on issues from a Catholic perspective.

Looking for more on the Season of Creation, check out the blog to read a powerful message from Pope Francis marking its beginning. https://www.faithcommongood.org/care_for_our_common_home_season_of_creation_2019