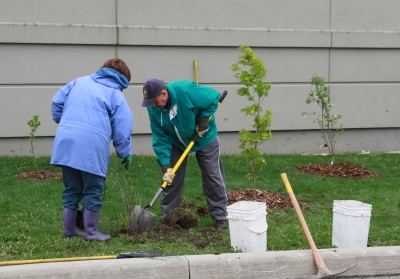 Forest Brook Community Church held a native species tree planting day at their property in Ajax, Ontario in May of 2013.

Dozens of volunteers, from senior citizens to high school students, gathered with shovels and garden gloves to plant more than 20 trees, 30 shrubs, and many herbaceous plants on grassy patches throughout the church grounds.

All plants were native species found naturally in undisturbed Southern Ontario forests, like Sugar Maples, White Spruces, Dogwoods, Basswoods, Oaks, Serviceberries, Purple Flowering Raspberries, and Bush Honeysuckles. Located in the Duffins Creek watershed near Lake Ontario, the effort will help improve the property’s ecosystem value and carbon sequestration over the long term, and, one might argue, enhance aesthetics.  Some invasive species, such as Dog-Strangling Vine, were also eliminated as much as possible, and dead Ash trees were also cut. The Ash trees, common on church property, are under imminent threat from the Emerald Ash Borer (a deadly insect predator) in the next 5-10 years, and planting now will help to establish larger trees as the Ashes decline and die.

So why would a church bother with such an event? Motivations can always be varied, but perhaps most fundamentally it was viewed by most participants and the church leadership as a means of helping to bring the reign of God more fully on earth, as taught by Jesus. It was also outlined as a form of healing, which Jesus so fully embodied. 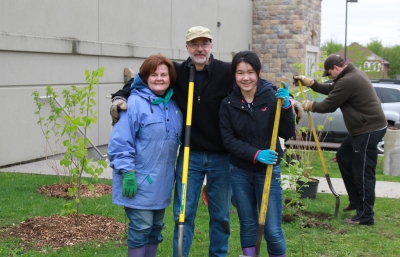 Though some plants have died, most have done well throughout the Spring and Summer, due mainly to cool, rainy weather and specific effort by church members to water plants during the hottest and driest spells.  There aren’t yet plans for further planting, but the potential certainly exists for similar days in the coming years, especially if outside funding can be secured.

The event was held in partnership with Urban Forest Associates and the estate of William M. Karney (a late church member). Special thanks to the Town of Ajax for the free provision of mulch, and the Forest Brook leadership and elders for ongoing support!