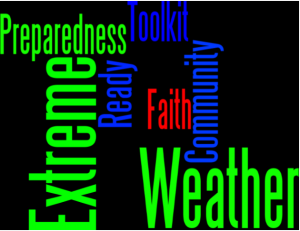 Extreme weather events are no longer once-in-100-years occurrences, thanks to climate change. Take the City of Toronto; it has experienced three super storms in the last 12 years alone. But extreme weather impacts are predicted to increase and government clearly can’t do it all.  So what happens to the vulnerable residents of our communities? Here’s where faith groups are stepping up and exploring how they can be of service within their neighbourhoods.

Helping those in need is in the DNA of faith communities—with outreach programs regularly being run by strong networks of committed volunteers (Out of the cold, food banks etc). Now, faith groups across the GTA and beyond are working with a broad range of community partners to prepare their places of worship in becoming extreme weather hubs.

In 2015, a national interfaith organization called Faith & the Common (FCG) piloted a project in Toronto to explore how 8 diverse faith communities across the city could be better utilized as neighbourhood service centres during extreme weather emergencies.

“Together, faith and community partners (and in some cases, local city councilors) helped to shape and determine what kind of hub would be offered at that site,” says Donna Lang, Project Facilitator. “They’ve made a plan for how they will all work together in the event of an extreme weather emergency.”

Beth Emeth Bais Yehuda Synagogue was one of the eight, FCG pilots.

Pearl Grundland is ED at Beth Emeth. “We are always thinking about ways to ensure that we remain a relevant, viable organization that also serves the broader community,” she says. “It’s part of who we are.”

During the ice storm of December 2013, local councillor, James Pasternak asked if they could stay open at Christmas day, gather donated toys and serve as a place where people could charge their cell phones. They obliged.

From there, the idea of becoming an extreme weather emergency hub evolved when they saw an opportunity to acquire a generator, since “becoming a full service institution is what we are aiming for,” Pearl reports.

Looking ahead, “We don’t have the expertise to run an overnight centre so to be effective, partnering is an important piece,” Pearl says.

Currently, Beth Emeth is working on renovating underutilized rooms to create a day program for special needs people. They are seeking funding for adding a second elevator to the building.

Alain Normand, Manager of City of Brampton’s Emergency Management Office (BEMO) recalls how during that same ice storm, many people were concerned, asking, “What can I do to help?” He explains that there were no resources to manage impromptu volunteers—not to mention safety concerns, potential liability issues, and the need for vulnerable sector checks on people who wanted to assist. Even though they knew there were a lot of vulnerable people in the city, “We had to refuse them,” Alain says. “We told them to go check on their neighbours.”

With that experience still fresh in the collective mind, the BEMO turned to social agencies and faith-based organizations so that when another extreme weather event occurs, they will be ready for action.

BEMO developed a “Vulnerability Map” connecting places of worship across the city to known vulnerable populations. These centers include a wide range of religions such as: Islam, Buddhist, Hindu, Sikh, and Christian. The first six potential candidates have been selected and the City of Brampton has started negotiations towards what they are calling “Project Lighthouse.”

Project Lighthouse is geared to having these faith groups and local agencies become the point of rendezvous for people needing guidance and support during emergencies.

“It’s a project that gives you direction; a safe haven. This is the place to navigate, train and equip volunteers. It acts as a communications centre because having information is critical so we need the mechanisms established in advance,” Alain says.

CREW is a Toronto-based grassroots, volunteer driven group that provides training, tools and strategies to help residents do what comes naturally — neighbours helping neighbours. They are working on developing a network of neighbourhood stakeholders including community groups, residents, faith groups, businesses and more.

“Even before the ice storm, there was a growing understanding amongst environmental activists around town, that weather is going to have impacts,” says Sheila Murray, Project facilitator of CREW.  “People were asking each other, “Who is going to get the word out?”

“What we are trying to do at CREW is how to make the buy-in about connecting to each other, as easy as possible.”

Sheila explains CREW’s concept: the more neighbourhood knowledge before something happens, the better. She suggests interested volunteers become “floor and block captains,” talk to the neighbours about the weather, and create a “vulnerable people list.”

She points to the work they are doing with Toronto Community Housing (TCH), linking stakeholders to two or three faith groups.

“People need to know that they have to be able to take care of themselves and their neighbours can help them.”

CREW is piloting its concept and methods in Victoria Village and Ward 13. It is also mapping neighbourhood resiliency, climate hazards and risks in neighbourhoods across Toronto wards, along with its local strengths and weaknesses.

“Research shows that the most resilient communities are those where the neighbourhood connections are strongest,” Sheila concludes.