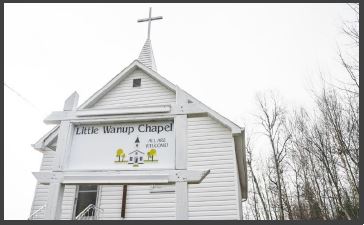 Built as a schoolhouse in 1923in this small community on the outskirts of Sudbury, the Chapel housed various congregations until St. Matthew’s Evangelical Lutheran left the building in 2014. The Little Wanup chapel was purchased by Rusty Cross and Erik Seyler from the Lutheran congregation. Seyler and Cross wished to enable community in their village by running the chapel as a community centre. While this is a start- up operation right now, it shows promise.

After purchasing the schoolhouse style chapel in 2014, Cross and Seyler offered that the former congregation could remain but they elected not to. The new owners began offering quilting classes in the space and made it available for yoga and community events. They were then joined by First Nations Church, led by Pastor Josh Sklar.

Pastor Sklar spoke extensively about being called to the community by a mission, the mission to be the central gathering place for the village. He runs a very large congregation in Sudbury central (450 to 600 congregants weekly) as well as First Nations Daycare, First Nations Housing and two other church plants.

He began the Wanup church plant in 2015 and now has about 40 to 50 congregants weekly. He is focused on an action-oriented mission, including supporting local fundraising runs, congregants working in soup kitchens, doing community food drives and hospice work.

The chapel is still consistently being used for community meetings, parties and other large gatherings, creating a ‘third space’ for local residents – a space distinct from their home or work environments. This diversification of uses is what Seyler and Cross had desired as it best serves the communities needs and provides financial strength.

Little Wanup is unusual in that two individuals felt strongly enough about the need for a community ‘third space’ that they put their own money and time on the line. Joined by other groups using the space they will hopefully remain at the centre of their community.