Like many churches across Canada, regular attendance is not what it used to be. In rural communities especially, an aging population and a global pandemic have also kept people away. Old Barns United in Lower Truro, Nova Scotia is no exception, averaging about thirty people every Sunday, according to Bob Francis, a member of the Board of Stewards and Trustees.

An affirming church with a progressive congregation, Old Barns is over a hundred years old, and while the congregation has grown smaller, it is still a strong, active and engaged community.

Before the pandemic, the church was a place not only of worship, but also of deep conversation. People were affected not only by the goings on in the local community, but also by what they witnessed via the news. “There were a lot of stories on environment,” says Francis, who led a recent initiative to green the old church building. “The stories were about the gravity of the crisis of climate change, with an occasionalgood news story of people doing something about it.” 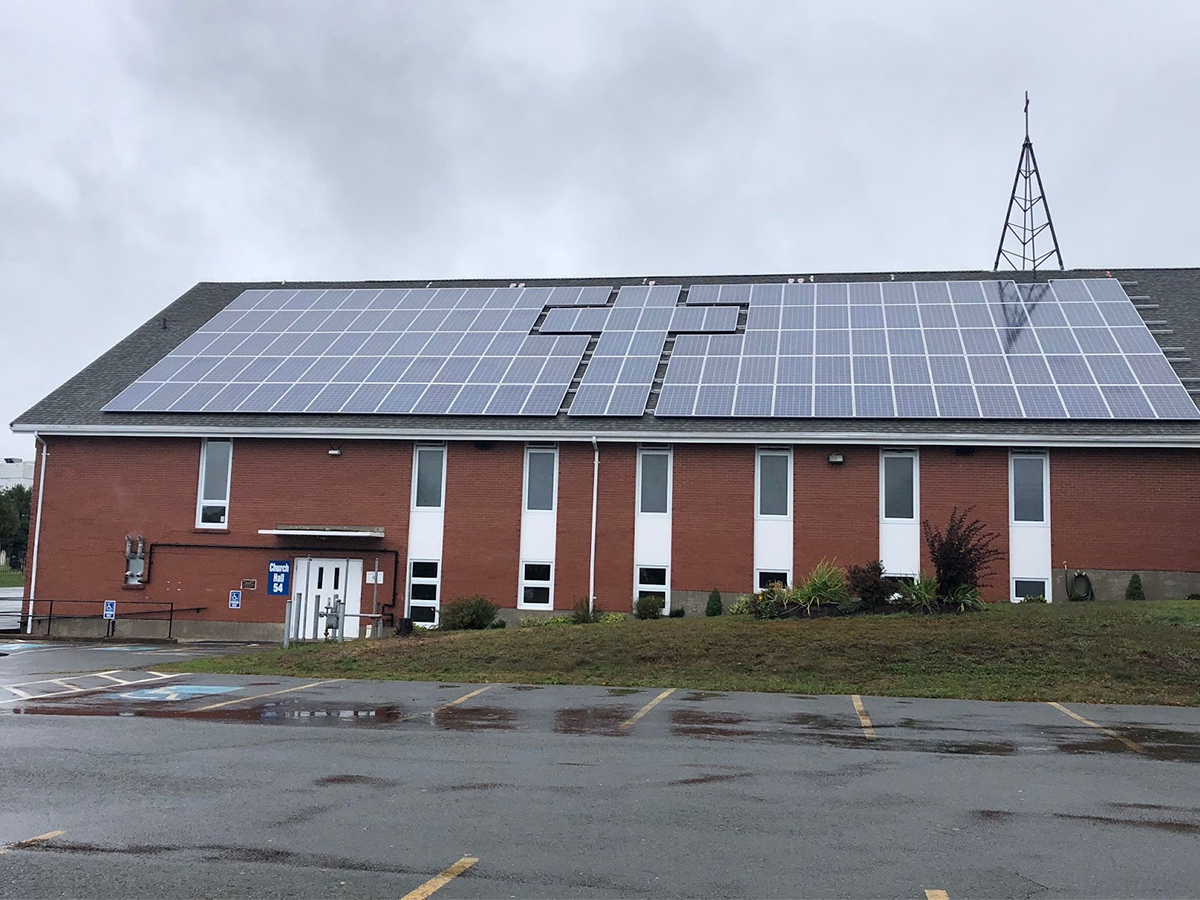 One such good-news story came their way in the form of Phillip Kennedy, a new minister previously serving at Woodlawn United in Dartmouth. Woodlawn United had installed solar panels to reduce its greenhouse gas emissions and save money. Kennedy’s experience got people talking about doing the same at Old Barns.

“But COVID put the screws to all that,” Francis says. “At least, temporarily.”

At the start of 2022, the board took up the conversation again, and Bob was willing to do the legwork and take action. He was an Atlantic regional manager before he retired and had no particular technical expertise, but he knew how to get things done.

The working group put together a wish list that included solar panels, heat pumps, changing the fluorescent light tubing to LED, and updating their older electric baseboard heaters, which took a long time to heat up and wasted quite a bit of energy in the process.

“It ended up being a major project,” Francis says.

He learned about the Faithful Footprints program and filled out an application. It was approved within two days. He found matching funding to cover the heat pumps and solar from Efficiency Nova Scotia’s Business Savings and Rebates program, which includes faith institutions. He also found an electrician willing to install the heaters on his own time, after hours. 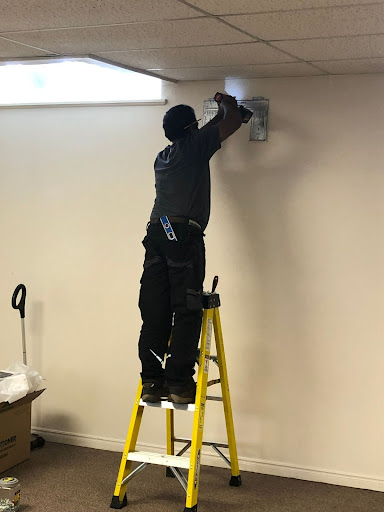 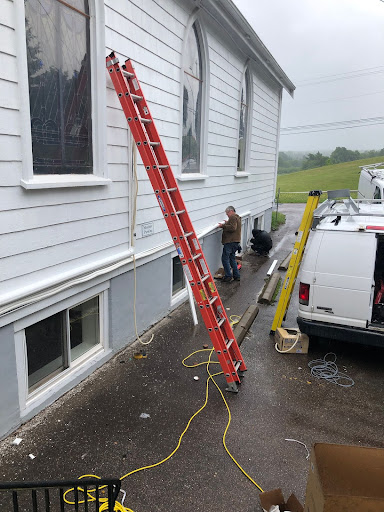 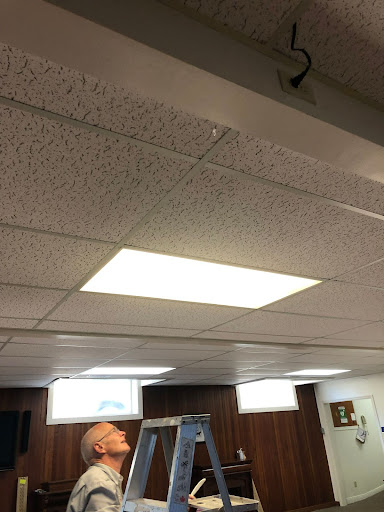 Since the project started in April, 2022, “We’re already seeing reduction in energy use,” Francis says. “In fact, we’ve produced 1,100kWh since October 20th. That’s pretty darn good considering the weather we’ve had. Today we produced 1.4 kWh of power, and we haven’t even seen the sun yet.”

Come the summer, Old Barns United won’t have any power bills at all. Already, they’ve turned their furnace off. 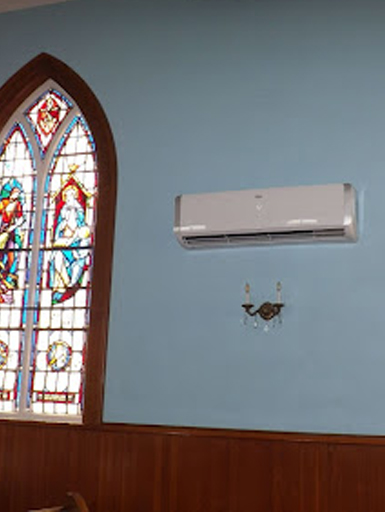 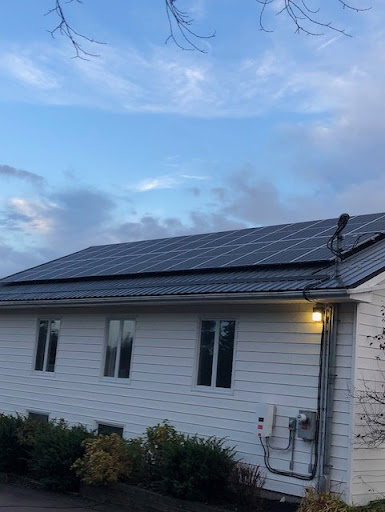 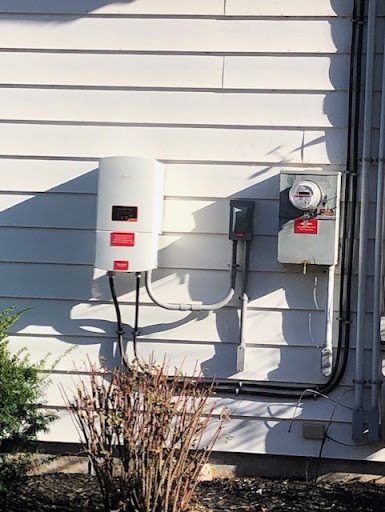 It may come as a surprise to know that Francis says the easiest part of the project was finding the money. With a grant from the Hunter Fund, for United Churches in Nova Scotia, Old Barns United will have covered 100 % of the costs—that's about $61,000 total. “It won’t cost us a penny.”

It’s also remarkable that all this was accomplished in only a few months. The church board developed a plan, which was approved unanimously by the congregation in May. “It’s not hard to get unanimous approval when it’s not going to cost you anything,” Francis says.

The feedback has been unanimously positive too. “At a recent event everyone talked about how they never felt more comfortable in the building, ” Francis says. “We haven’t really broadly promoted it yet—we plan to do so when it gets warmer, but for now we’re letting other churches know about it.”. The congregation invites everyone to come visit.

It’s an impressive conversion in such a short time, one that significantly reduces Old Barns’ greenhouse gas emissions, saves them money, and creates a more comfortable space for the community.  And to top it all off, the church is living the message in its Creed: “Living with Respect in Creation.”

The United Church of Canada (UCCan) Faithful Footprints program offers inspiration, tools, and grants to help its faith-communities reduce their carbon footprint. With the Church’s commitment to reducing its greenhouse gases (GHG) emissions by 80% by 2030, this one of a kind program offers up to $30,000 in grants towards energy conservation and renewable energy projects (conditions apply).

Faith & the Common Good is the delivery partner for UCCans Faithful Footprints program. To date, we have engaged over 300 congregations, camps, and buildings across the country. Your participation in the program puts your faith into action and helps the Church reach its target.

Chris Benjamin is the Atlantic Regional Support Coordinator for the Faithful Footprints program and can be reached at [email protected].