As an independent K-12 school located in Richmond Hill, Holy Trinity School (HTS) proves to be an aspirational leader when it comes to educating, promoting and advocating for sustainability. After joining ClimateWise Business Network in June 2018, HTS has participated in Faith and the Common Good’s Energy Benchmarking for Faith Buildings program and they are currently in the process of creating an action plan to achieve their greenhouse gas reduction goal. In May 2019, Holy Trinity School received recognition for their commitment to sustainability as they received an award for Engaged Green Team at ClimateWise’s York Region Sustainability Awards. 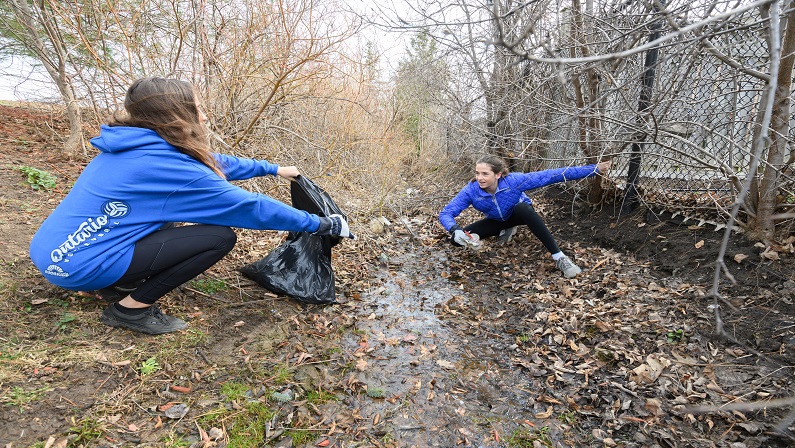 From annual waste audits to high school students conducting workshops for elementary grade students, Holy Trinity School proves to be a leader when it comes to confronting and addressing environmental concerns. Starting at a young age, students such as 16-year old Helena Kulasingham are taught to value and protect the environment through a school curriculum that mentions sustainability in its core science, religious knowledge, and social science classes. Last year after HTS became a member of ClimateWise, Helena and her EcoTeam co-leader Nicole Lee were invited to be members of the Green Team by the school’s Environmental Sustainability Coordinator Jacqueline Butler. While the EcoTeam is a student-led co-curricular club that runs different fundraisers and drives throughout the year, the Green Team is led by higher decision-making authorities in the school.

To Jacqueline, the formation of the Green Team was an opportunity to connect the school’s high-level decision-making authorities with its food provider Aramark, waste partner MASS Environmental Service, EcoTeam student leaders, and even parent voices to discuss strategies to move forward with the school’s greenhouse gas reduction strategies. When asked about how the school has benefitted from the creation of a green team, Jacqueline responded by saying, “the green team brought to the table a higher level of leadership to commit.”

The creation of the Green Team resulted in concrete goals to reduce GHG and waste, along with greater accountability on how to achieve those goals. Currently, the HTS Green Team is working on their “75 in 5” action plan. This plan consists of obtaining a Portfolio Manager Energy Star score of 75 and waste diversion rate of 75%. In order to achieve this ambitious goal, the HTS Green Team will need to address an aging infrastructure that will require retrofits in order to increase its energy efficiency, along with implementing a policy to eliminate single use plastics. Nonetheless, the HTS Green Team shows no signs of slowing down and seems to be going full speed towards achieving their “75 in 5” goal.

Thank you, Holy Trinity School, for being a sustainability leader and aspiration to us all!

Acknowledgments: Thank you Helena Kulasingham and Jacqueline Butler for providing us with information on the school's green team and ongoing sustainability initiatives.