Intergenerational solidarity is not optional, but rather a basic question of justice, since the world we have received also belongs to those who will follow us.” Pope Francis, 159 Laudato Si’ 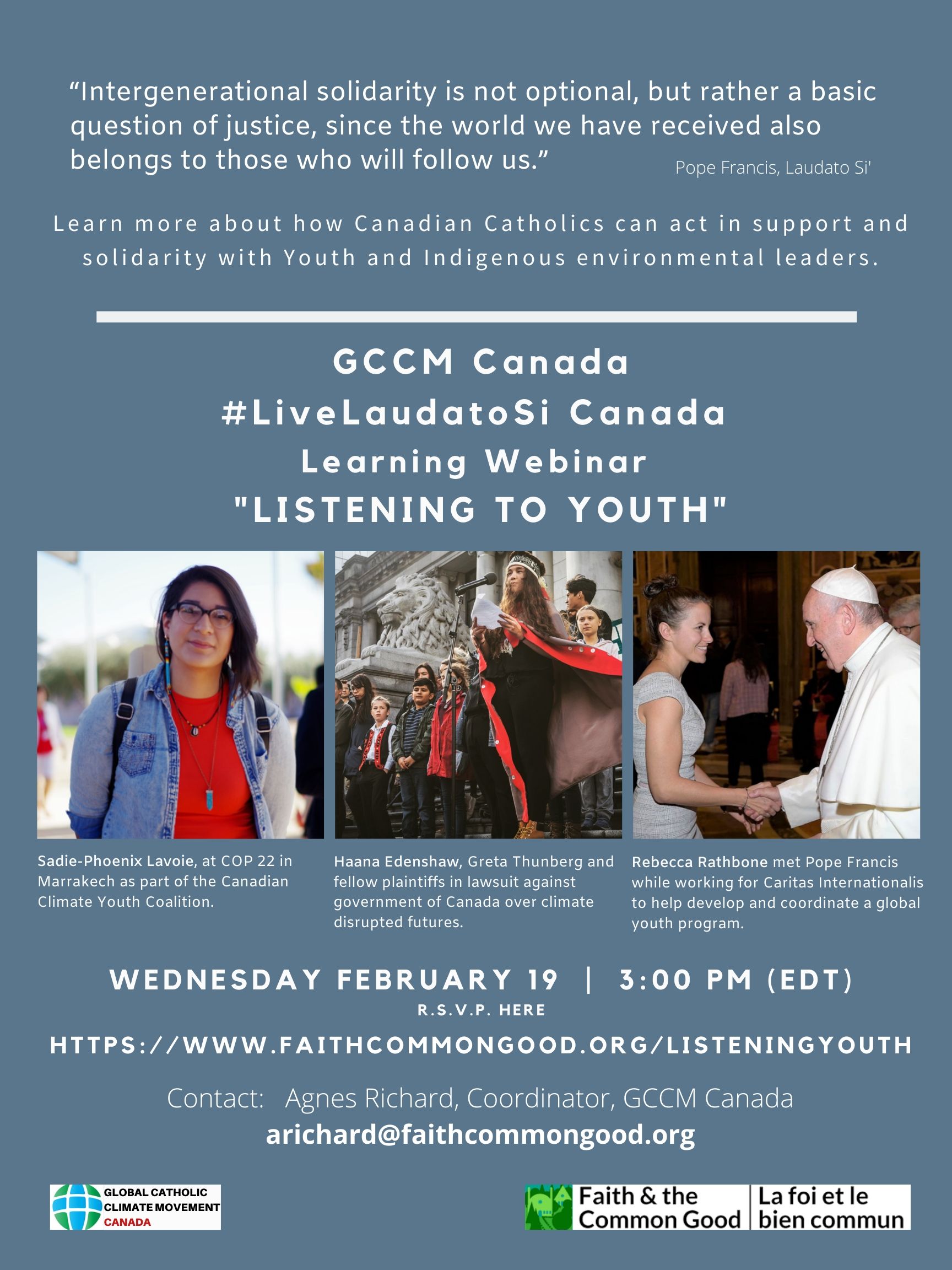 Learn how Canadian Catholics can act in support and solidarity with Indigenous and Youth environmental leaders.

Purpose: To introduce three dynamic young Canadian women who are defending land, water, culture, and our future. Hanna Edenshaw of the Haida Gwaii Nation, Sadie-Phoenix Lavoie an Anishinaabe Two-Spirit from Sagkeeng First Nation and Rebecca Rathbone will share their experiences, the projects they are currently working on and how we can support them. We will also be discussing the disproportionate impact that climate change and unsustainable resource extraction have on Indigenous Communities in Canada and elsewhere.

Haana Edenshaw is a high school student from Masset, Haida Gwaii, on BC’s north coast. She is an environmental activist who has been on protest lines to protect the lands of Haida Gwaii since before she could walk, and is founder of Damaan Tlagee, (protect the land) a community youth environmental organization. Haana has also helped her school get a machine that turns plastic to fuel to demonstrate how ocean plastics can be cleaned up and reused. Haana has been a youth representative for Haida Gwaii Communities Against Supertankers (CoASt) and Swiilawiid Sustainability Society’s initiative to see the Islands become energy sovereign. She has spoken at the UN Permanent Forum for Indigenous Issues and is currently suing the federal Canadian Government for a court-ordered climate plan.

Sadie-Phoenix Lavoie is an Anishinaabe Two-Spirit from Sagkeeng First Nation located on Treaty 1 territory. Sadie-Phoenix are currently the Community Coordinator at Wa Ni Ska Tan: An Alliance of Hydro-Impacted Communities, and Co-Founder of Red Rising Magazine. Sadie-Phoenix worked on numerous student led initiatives at the University of Winnipeg, including the Fossil Fuel Divestment Campaign, as well attended the UN COP22 in Marrakech, Morocco on behalf of the Canadian Climate Youth Coalition. They were also one of the 100 youth arrested on Parliament Hill protesting the Kinder Morgan Pipeline, and have been on the front lines at Standing Rock, North Dakota. Sadie-Phoenix Lavoie received the Dr. Tobasonakwut Kinew Leadership Award at the University of Winnipeg and the Next Generation Peacemaker Award from the Peace and Social Justice Studies Association of Canada.

Rebecca Rathbone is the Southwestern Ontario Animator for Development & Peace – Caritas Canada, which is the official Humanitarian Aid and International Development organization of the Catholic Church in Canada. In this role she supports the work of volunteer members who carry out Development & Peace’s Education, Advocacy, and Fundraising campaigns in the dioceses of Hamilton, London, and St. Catharines. She also represents Canada on the global working group of the Global Catholic Climate Movement’s youth wing, Laudato Si Generation, and helped this group to present the Climate Manifesto to Cardinal Tagle at World Youth Day 2019 in Panama. In 2019 she worked for Caritas Internationalis for six months, to help to build and coordinate a global youth program for the Caritas confederation and its 160+ member organizations around the world. She holds a Masters of Global Affairs degree from the Munk School of Global Affairs and Public Policy at the University of Toronto.

As Pope Francis teaches in Laudato Si’, unprecedented ecological devaluing, pollution, and waste is endangering the flourishing of future generations. Moreover, the cost is being born disproportionately by vulnerable communities around the world. Catholics have been called upon by our last three popes and the Canadian bishops to respond to these social and ecological, moral and spiritual crises. We need to care for our common home in order to heal our relationships with our human family, the rest of creation, and God.