“God lights up stars to help us keep walking... Christ himself is our great light of hope and our guide in the night, for he is the “bright morning star” (Rev 22:16).” Pope Francis.

Advent is a time of longing for God, a journey seeking transformation in our hearts and our world so that Christ’s light will shine more clearly. One of the transformations needed is found in Pope Francis’ prayer intention for the month of December, calling us to pray “that every country decides to take necessary measures to make the future of children a priority, especially the future of children who are suffering today”. He highlights that in every child who is marginalized, abandoned, without medical care… “is Christ, who came to our world as a defenseless child”.

The future of children, especially those suffering today, has yet to be prioritized by countries’ actions on climate change.

“We have caused a climate emergency”

This year has seen a growing number of climate emergency declarations including from 11,000 scientists, Canada, Toronto, and Pope Francis. In June and during the Season of Creation Pope Francis emphasized the need for urgent transformative action and  stated: “We have caused a climate emergency that gravely threatens nature and life itself, including our own.”

The reasons why Pope Francis declared a climate emergency include scientific warnings, the cry of the poor who face the greatest impacts of climate change while contributing the least as well as concern for future generations. In a June address, Pope Francis twice emphasized, “Our children and grandchildren should not have to pay the cost of our generation’s irresponsibility.”

These climate emergency declarations are based in science such as the 2018 Global Warming of 1.5°C Report by the UN Intergovernmental Panel on Climate Change (IPCC). It emphasized that limiting global warming to 1.5°C would significantly reduce the risks compared to 2°C where predicted consequences include the loss of virtually all coral reefs; more extreme heatwaves, water scarcity and poverty; and more risk of long-lasting or irreversible changes. Limiting global warming to 1.5°C is still possible but requires “rapid and far-reaching” transitions as net carbon dioxide emissions need to fall by about 45% from 2010 levels by 2030, and reach ‘net zero’ by 2050.

The 2019 UNEP Emissions Gap Report warns that we are on track to reach 3.2°C of global warming by 2100 where areas of the planet become uninhabitable. It is still possible to limit global warming to the safer 1.5°C Paris Agreement target if we cut global emissions by over 7% every year for the next decade. 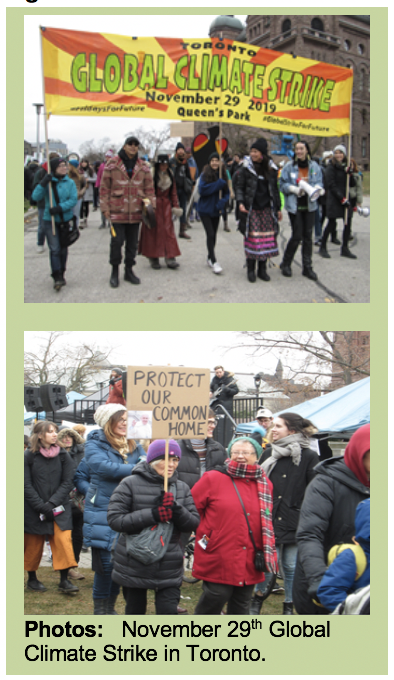 A little over a year ago a 15-year-old Swedish girl named Greta Thunberg was striking alone from school every Friday for action on climate change. This month she became Time magazine’s youngest person of the year and millions have joined her in climate strikes around the world. In Toronto, thousands filled Queen’s Park and the surrounding streets for the September 2019 global climate strike. Laudato Si’ Generation, the youth branch of the Global Catholic Climate Movement, has been leading a growing Catholic participation in the climate strikes. While young people lead, older generations have been joining in solidarity.

Over 1 million people participated in the November 29th global climate strike leading up to the UN Climate Change Conference from December 2-13 in Spain. A large climate strike and other protests took place in Madrid and Greta Thunberg spoke truth to power at the UN conference. The most vulnerable countries, the 47 low-income and 44 small island and low-lying coastal developing countries called for greater ambition and urgency during the UN negotiations “to hold warming at a level that does not threaten their very survival”.

Faith leaders and communities have supported the youth movement and also called for greater climate ambition and urgency. Faith communities presented an interfaith declaration and climate emergency message to the UN conference stating “As faith communities, we seek to offer a positive and empowering voice of hope over fear, of compassion over indifference, and urgent and fair action as a moral obligation.” The World Council of Churches executive committee declared “a climate emergency, which demands an urgent and unprecedented response by everyone everywhere”.

In his message to UN conference participants, Pope Francis emphasized: “There remains a window of opportunity, but we must not allow it to close”. Catholic Church leaders from around the world who had recently gathered for the Synod of Bishops on Amazonia, called for urgent climate action, in support of peoples of the Amazon region, Indigenous Peoples and the youth climate movement. Catholic organizations have been working for solidarity and urging a moral perspective at the climate negotiations. The youth movement and faith communities have also supported Indigenous Peoples in their call to respect Indigenous rights.

Canada’s commitments outlined in Madrid on December 10th were welcomed by Canadian environmental groups. These commitments include legislating a net-zero-by-2050 goal with milestones every 5 years, a just transition act, as well as supporting strong rules under the Paris Agreement so that carbon trading leads to greater emission reductions and human rights and the rights of Indigenous Peoples are respected in the  Paris Agreement. Canada still has work to do in order to live up to these commitments.

Many were disappointed with the lack of progress when the UN climate summit ended last Sunday in the latest ever overtime finish. It fell far short of the ambition needed despite hopes raised by the numerous climate emergency declarations and massive youth climate strikes. Contentious decisions are left for next year after climate negotiations failed to reach consensus in many areas as some countries blocked ambition or looked for loopholes. One area where the Vatican, Greta Thunberg and, others are finding hope is in the growing peoples’ movement.

Invitation to a journey of ecological conversion in 2020

In his 2020 World Day of Peace message, released during the UN conference, Pope Francis highlights the way to peace includes a journey of ecological conversion involving “a transformation of how we relate to our sisters and brothers, to other living beings, to creation in all its rich variety and to the Creator who is the origin and source of all life.” Other faiths also expressed “It is time for metanoia for all”. Metanoia means a transformative change of hearts and minds. During 2020 there will be many opportune times for this transformative change to unfold including the 50th anniversary of Earth Day on April 22nd, the Season of Creation and the fifth anniversary of Laudato Si’. Let us find new ways to let Christ’s light shine more clearly in care for our common home.